The Most Daring Red Carpet Looks in Grammy Awards History

The best part of awards shows isn’t the presenters or the montages or even the awards. The best part, naturally, is the red carpet. That’s what we end up remembering years after the show goes off the air. Every year, it seems, new fashion barriers are broken on the red carpet. We’ve learned that nothing is too outrageous, too over the top, or too revealing. And if you think something is, well, just wait until next year! We’ve rounded up the 20 sexiest, wildest, most absurd looks in Grammy Awards history. Some are gorgeous and others missed the mark, but all are memorable. These are the most daring Grammys red carpet looks of all time.

Which of these do you find most daring? Which are the sexiest? Let us know on Facebook and make sure to SHARE this with your celebrity-obsessed and fashion-obsessed friends! 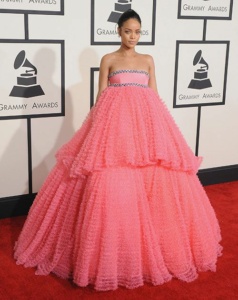 Rihanna rocked this wedding dress-like gown to the 57th Annual Grammy Awards in Los Angeles. How about that color?! The singer and songwriter certainly couldn’t be missed on this evening. Rihanna performed “FourFiveSeconds” that night with Kanye West and Paul McCartney, and “The Monster” — an Eminem song that she sang on — won the award for Best Rap/Sung Collaboration. For fans of Rihanna, you know this wasn’t the only daring red carpet look. Keep scrolling… 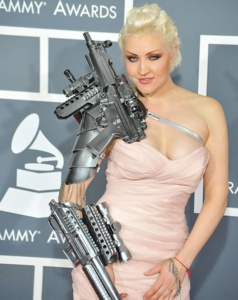 Whoa. What is that?! Singer/songwriter Sasha Gradiva came “armed” to the 54th Annual Grammy Awards with a pink dress and a … gun sleeve. There was an uproar in the media about the never-before-seen (at least to us) outfit, for which Gradiva explained that she was attempting to make a statement about gun control. After this, the artist became known to many as “The Gun Girl.” 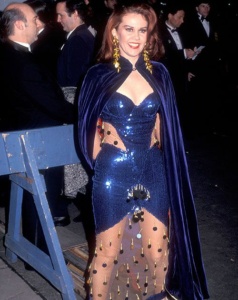 Singer Kate Pierson sported this blue, somewhat see-through dress — equipped with a cape — to the 33rd Annual Grammy Awards at Radio City Music Hall in New York City. Certainly an interesting choice, no? We’re not sure we’ve seen anything like it. And look at those earrings! Pierson has been the vocalist of The B-52s since 1976. 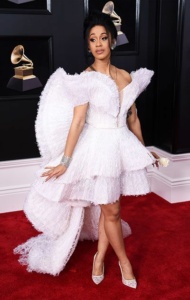 Rapper Cardi B donned this cute little number to the 60th Annual Grammy Awards at Madison Square Garden in New York City. It’s a bit out there, but she looks absolutely adorable. Cardi B and Bruno Mars performed “Finesse” that night, and she was nominated for two Grammys (Best Rap Performance and Best Rap Song). 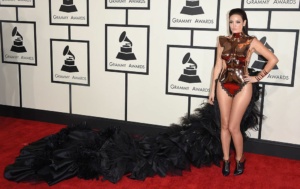 Albanian singer and actress Bleona Qereti wore this awfully interesting outfit to the 57th Annual Grammy Awards in Los Angeles. Look at how long it is! She looks like a superhero, doesn’t she? It’s definitely sexy, definitely revealing, and definitely over the top. She kind of pulls it off, though. 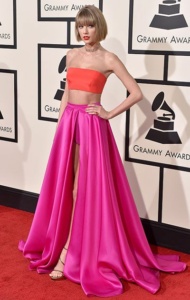 The always fashionable Taylor Swift looked breathtaking at the 58th Annual Grammy Awards in Los Angeles. The singer/songwriter managed to somehow pull off a slightly naughty and elegant look at the same time. Swift performed “Out of the Woods” that night and was nominated for seven Grammys. She won three awards: Album of the Year (1989), Best Pop Vocal Album (1989), and Best Music Video (“Bad Blood”). 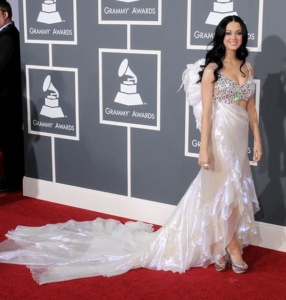 Katy Perry looked like a fairy and/or princess at the 53rd Annual Grammy Awards in Los Angeles. Gorgeous as always, she performed “Not Like the Movies” and “Teenage Dream” at the show. Perry received four nominations — Album of the Year, Best Female Pop Vocal Performance, Best Pop Collaboration with Vocals, and Best Pop Vocal Album — but didn’t win any awards. 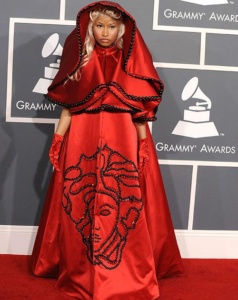 Nicki Minaj, what are you hiding under there? This was certainly a peculiar look for the rapper at the 54th Annual Grammy Awards in Los Angeles. Minaj performed “Roman’s Revenge” and “Roman Holiday” that night and was nominated for four Grammys (Album of the Year, Best New Artist, Best Rap Performance, and Best Rap Album). She didn’t win any awards, but she certainly left us with a look we’ll never forget. 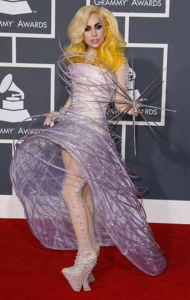 Lady Gaga returns to our list with a vengeance! This is peak Gaga — unique, bold, inexplicable, and badass. Very few people could pull this off, but she’s one of them. The pop goddess donned this daring dress at the 52nd Annual Grammy Awards in Los Angeles. Gaga and Elton John performed “Poker Face,” “Speechless,” and “Your Song” that night, and she won Grammys for Best Dance Recording (“Poker Face”) and Best Electronic/Dance Album (The Fame).