Shortly ahead of the US National 2020 census, President Trump’s campaign is running ads on Facebook that some are saying are misleading users into thinking that a data-gathering and fundraising survey for the Trump presidential campaign is actually the official US national census. Facebook confirmed with Recode that it plans to take down the ads.

According to Facebook’s ad library, Trump’s Facebook page is running a series of hundreds of ads asking users to respond to what it calls a “census.” But in fact, the ads point to a campaign survey for Trump, not the official 2020 US census. Critics say the ads could mislead users into thinking that they’re filling out the actual census when they’re not — potentially discouraging people from filling out the real US census that will be hitting mailboxes next week. The US census is critical in determining representation and funding for communities, including how $1.5 trillion in federal resources are spent.

While the ads also refer to the form as a “survey” to help Trump craft a “winning strategy,” many are saying they conflate political campaign language with that of official census communications. Facebook has touted its policy against census misinformation, banning “misleading information about when and how to participate in the census and the consequences of participating,” including in ads. But the social media giant reportedly told Judd Legum’s Popular Information, which first pointed out the issue Thursday morning, that the ads do not violate Facebook’s policy because in Facebook’s view they are related to the Trump campaign and not the census.

Upon further review, though, Facebook spokesperson Andy Stone told Recode later on Thursday that Facebook is taking down the ads in question and shared the following company statement:

“There are policies in place to prevent confusion around the official U.S. Census and this is an example of those being enforced.”

Trump’s campaign did not respond to a request for comment in time for publication.

Here’s the language of one of the Trump Facebook ads in question:

This survey is ESSENTIAL to our team’s 2020 campaign strategy. We need Patriotic Americans like YOU to respond to this census, so we can develop a winning strategy for YOUR STATE. Your participating in this national effort will provide us with the detailed data we need for YOUR CONGRESSIONAL DISTRICT. It is important that we get as many responses as possible, so we can craft a winning messaging strategy. 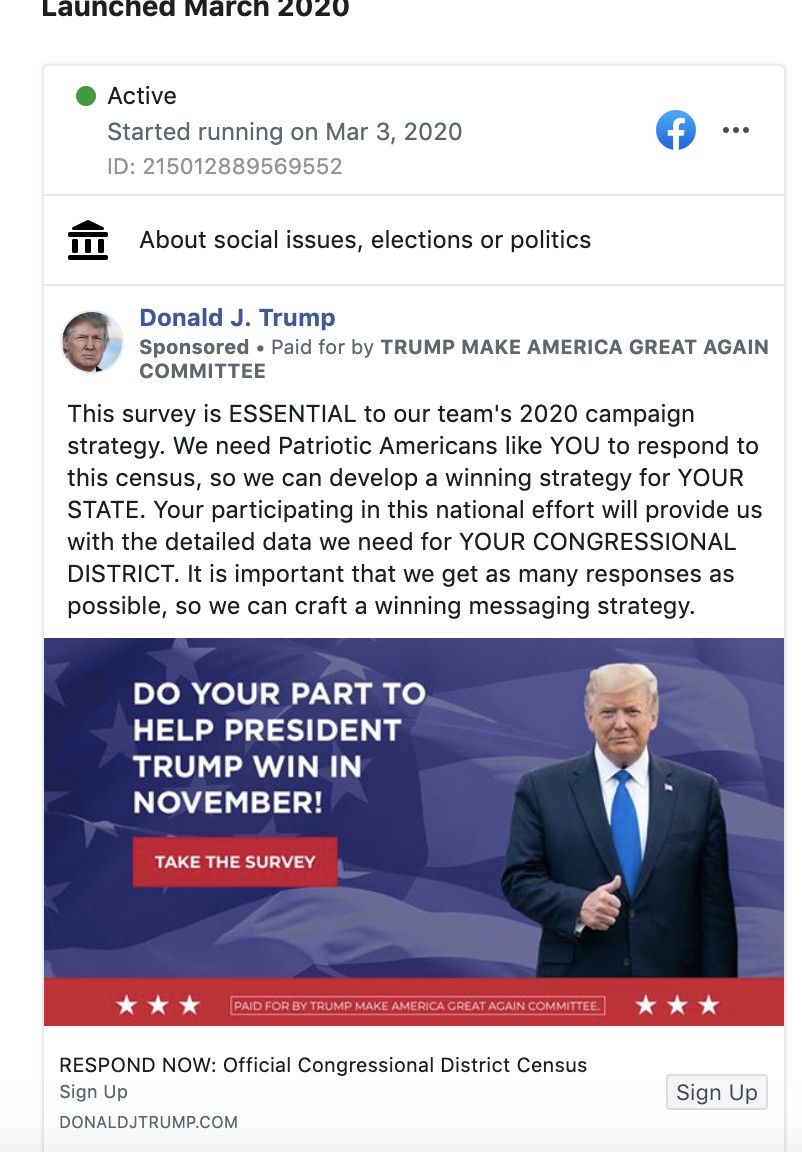 The ads are labeled as “Paid for by the Trump Make America Great Again Committee,” and they link to a form on Trump’s website that’s topped with a bright red banner that reads “OFFICIAL 2020 CONGRESSIONAL DISTRICT CENSUS.” The form then asks a series of questions such as, “Do you plan on supporting President Donald Trump in the 2020 Presidential Election?” and, “From what media source do you regularly receive your political news?” At the end, survey takers are asked to donate to the Trump campaign. 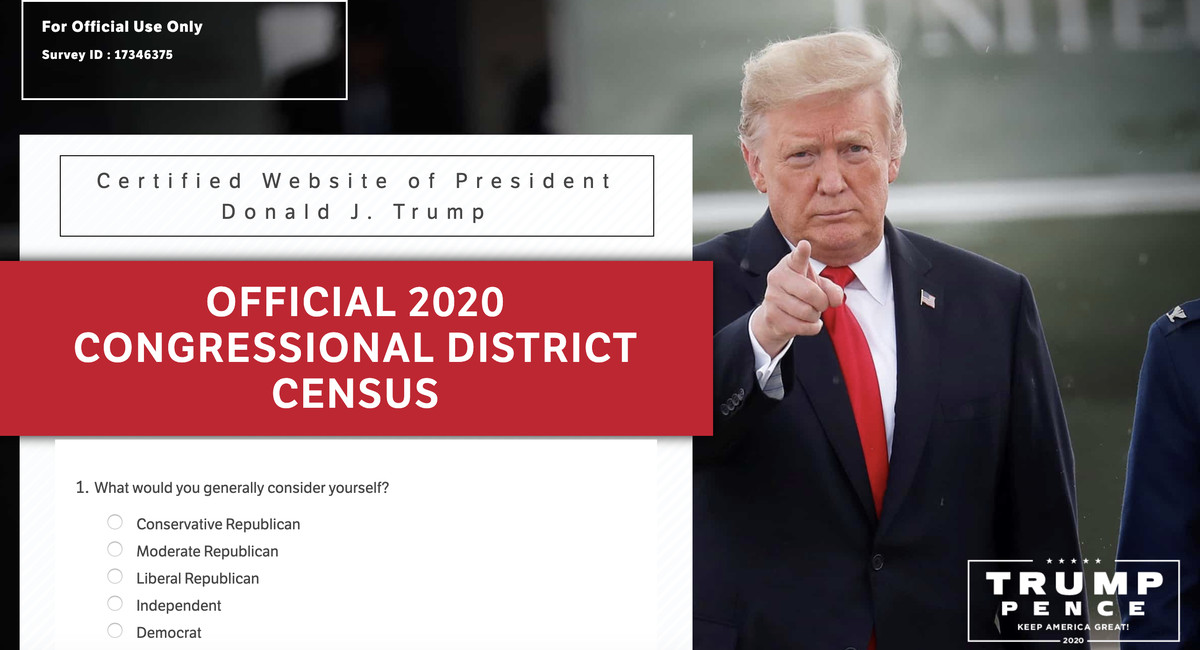 “I absolutely think that these ads are deceptive,” said Keshia Morris Desir, the census project manager for government watchdog organization Common Cause. Morris Desir acknowledged that the ads also clearly affiliate themselves with Trump’s campaign, but said they were still misleading. “Although they also say things like ‘Help Trump Win’ — I definitely think that the fact that you name this as a census at the same time that the 2020 census bureau will be sending similar communications for folks to fill out their census form is unfortunate.”

The real census does not ask partisan questions, nor does it ask people to donate money or support to any political campaign.

Morris Desir said this is another example of how, even beyond using the word “census,” the ads are using deceptive tactics. In one case, one of the Trump Facebook ads includes a video with a clip-art-style image of a scroll that says “2020 Census” with an American Flag on it, next to an image of Trump giving a thumbs-up sign and text that says “Help Shape President Trump’s Winning.” 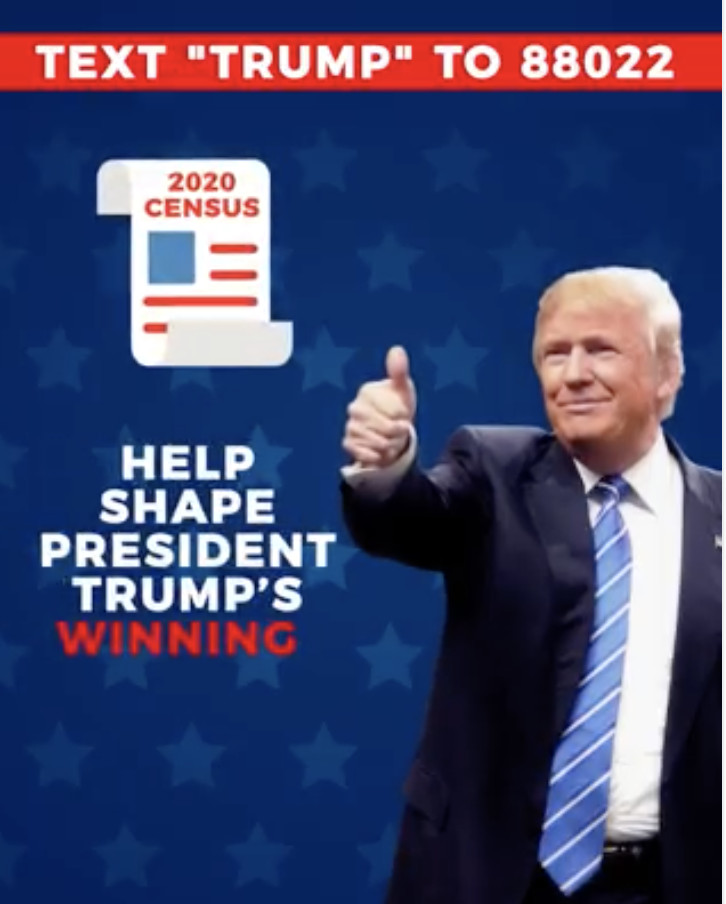 This isn’t the first time that the use of the word “census” in political materials has been criticized. The Trump campaign has recently also been criticized by California Rep. Katie Porter for allegedly sending out texts urging recipients to complete a “census survey” that asked similar questions.

Meanwhile, since 2000, the Republican National Committee has sent out “Congressional District Census” mailers that request fundraising dollars in addition to asking partisan questions, around the same time as the official US census forms are sent. (Notably, Trump’s campaign site also calls its form a “Congressional District Census.”) The Democratic party has repeatedly complained about the mailers and pointed to people who reported being confused about the surveys. But so far, they’ve avoided any penalty because they skirt the existing regulations on deceptive mail practices.

Back in 2010, New York Rep. Carolyn Maloney introduced successful legislation to make it illegal for look-alike census communications to use the word “census.” The law was a response to census-style mailings from the RNC a decade ago, and some politicians have called for it to be updated.

But aside from US law, Facebook already has its own established rules to deal with this kind of content. Now, with these new Trump ads, it’s coming down to a question of how the company is going to actually enforce those rules.